Saving the reefs with FORCE

(ZIZ)– A national consultation was held on Tuesday looking at the conservation and protection of coral reefs not only in St Kitts and Nevis but throughout the region.

The EU-funded Future Of Reefs in a Changing Environment (FORCE) workshop was held in an attempt to identify the types of management in use across the Caribbean, the role of governance in supporting or constraining effective reef management, and the impact of particular management tools on reef-dependent livelihoods.

Permanent secretary in the Ministry Of Marine Resources, Ashton Stanley says there are many factors that contribute to the degradation of coral reefs.

“Coral reefs ecosystems in most regions struggling as a result of the stress caused by pollution, segmentation, hurricanes, coral diseases and unsustainable and destructive fishing practices,” he said.

He says the local government has already taken steps in protecting reefs including through the introduction of Fish Aggregating Devices (FADS).

“FADS have yielded more than 160,000 pounds of large fish which equates to $1.6 million dollars — Eastern Caribbean dollars in direct revenue to fisher folks,” he said.

The Department Of Marine Resources will use the results of the research to guide its management measures for fishing activity and mobilize resources to enhance the development of fisheries in St Kitts and Nevis. 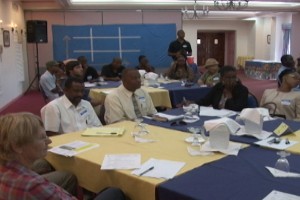 Promoting Awareness of “The Narrows”
Scroll to top