A fish aggregating (or aggregation) device (FAD) is a man-made object used to attract ocean going pelagic fish such as marlin, tuna and mahi-mahi (dolphin fish). They usually consist of buoys or floats tethered to the ocean floor. Over 300 species of fish gather around FADs. FADs attract fish for numerous reasons that vary by species.

Fish tend to move around FADs in varying orbits, rather than remaining stationary below the buoys. Both recreational and commercial fisheries use FADs. 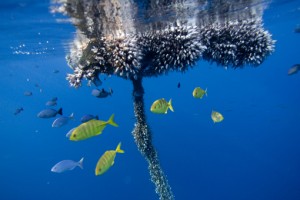